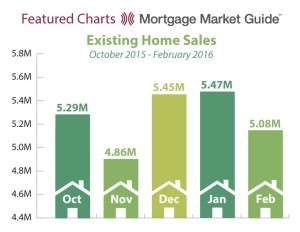 After hitting six-month highs in January, February Existing Home Sales slipped by 7.1 percent from the previous month to an annual rate of 5.08 million, below the 5.37 million expected. The National Association of REALTORS® (NAR) said that a low supply of existing homes and steady price growth were the reasons behind the decline. Sales are up 2.2 percent from February 2015.

Lawrence Yun, NAR chief economist said, “The lull in contract signings in January from the large East Coast blizzard, along with the slump in the stock market, may have played a role in February’s lack of closings. However, the main issue continues to be a supply and affordability problem. Finding the right property at an affordable price is burdening many potential buyers.”

How Can We Help?